Setting The Highest Standards in Dental Ceramics since 1976

A predicament in need of a solution

Years ago, a young dentist was confronted with the issue of total edentulism in a poignant situation that was, at the time, all too common in the dental profession.

I was meeting with a patient whose quality of life would have improved enormously, had I only been able to provide him with a complete bone-anchored solution. Unfortunately, I had to tell him that placing implants in his maxilla was virtually impossible due to the lack of viable bone tissue there.

Back in the nineties, in his situation, the only practicable implant solution involved preparatory bone grafting, also known as bone augmentation, but such a costly procedure was out of my patient’s reach financially, and his history of heart problems indicated that it would not be wise to proceed with such an invasive course of action in any case.

Unfortunately, cases like his were—and continue to be—commonplace among seniors.

Under the best of circumstances, bone grafting can provide an effective foundation for implant-based prostheses. Unfortunately, the aggregate need among the totally edentulous population for permanent solutions (and thus genuine oral rehabilitation) far outstrips the number of best-of-circumstances cases.

Looking at the big picture, it became obvious to me that the optimal general solution to the problem of total edentulism was not going to comprise bone augmentation.

Too many patients either could not be recommended for such procedures as a result of physiological limitations, or would not be able to finance such complex, multi-stage treatment.

Even if these obstacles could be overcome, there was still the question of the availability of surgeons skilled in the procedures of bone grafting.

When an estimated 45% of the population over 70 in North America and Europe is in need of complete oral rehabilitation (see page 8 for more figures), it is self-evident that a more time-efficient and reliable procedure than bone grafting is needed to meet burgeoning demand.

I decided to tackle the problem. My objective was simple: to provide fixed, long-lasting teeth on a reliable basis for my totally edentulous patients, who were a large and growing part of my practice. In order to meet this goal, I devised the following strategy.

First, I would determine the minimum amount of bone volume that was required for the routinely successful use of existing implant technology in connection with fixed prosthetics.

Second, in the pursuit of alternative solutions, I would retroactively evaluate all the totally edentulous cases that had been treated at my clinic for which the generally accepted implant procedures of the time could not be recommended. I spent a great deal of time exploring treatment alternatives through the review of scientific literature. In the process, an intriguing question arose.

How many teeth do we really need to assure pleasant esthetics and good masticatory function? No one seemed to be posing this question in the dental journals, yet without an answer, it would be impossible to optimize the bone-anchored rehabilitation I was pursuing.

Think of it this way: As the number of teeth in a full-arch restoration increases, so does the amount of bone needed to support the underlying implants that support it.

In order to determine the minimum number of teeth needed to guarantee good mastication and esthetics, we devised something we alled the “nut test.” We gave our test subjects a standardized portion of almonds, asked them to chew for ten seconds, and then we aspirated the crushed nuts in order to subsequently measure the size of the particles; the idea being that the smaller the particles, the greater the masticatory efficiency.

We compared the results from subjects with arches comprising 10 teeth (2nd premolar to 2nd premolar) togohers with 12 teeth in each arch (1stmolar to 1st molar) and to yet others with 14 teeth per arch (2nd molar to 2nd molar).

The results showed that while 14 teeth per arch provided the greatest chewing efficiency, 12-tooth arches worked almost as well, and even 10 teeth provided acceptable mastication in terms of facilitating ingestion.

From the esthetic point of view, it was easy to demonstrate that, while smiling, most of our subjects showed half of the first molar. To maintain good esthetics then, we determined that a 10-tooth arch was not adequate. On the other hand, the most posterior teeth of a 14-tooth arch would rarely, if ever, be seen by the subjects’ acquaintances.

With these results in hand, we knew how to proceed and began to develop an oral rehabilitation solution that would deliver 12 teeth per arch (1st molar to 1st molar).

In the mandible, we typically find enough bone to place straight implants in between the foramina mentalis, but not enough to place any posterior to the foramina. Depending on the position of the foramina, we found that we could place between six and eight teeth with no substantial cantilevers.

Evaluating the force on the implants due to cantilever bending in situations like these, however, one finds that the implant closest to the cantilever is subjected to substantial (and escalating) forces as the cantilever increases. Such forces do not bode well for successful long-term prognoses.

In order to reduce the length of the cantilever by one or two teeth, and thus improve the biomechanical long-term outcome, we chose to incline the posterior implant. Literature reviews showed us that angled implants had been in use for decades by Professor Brånemark and his colleagues (Kallus et al. 1990) and had no higher failure rates than straight, axially loaded, implants.

In a fruitful cooperative effort with the late bioengineering professor Bo Rangert at Nobel Biocare, we realized that the use of long, well-angled posterior implants would be one of the keys to reaching our objectives.

Together with the straight anterior implants, these angled posterior implants become components in a virtual truss, making it possible to avoid vulnerable anatomical structures, while offering improved support of the prosthesis by reducing cantilevers.

What’s more, the apex of the angled implant can be placed in better quality anterior bone. A straightforward treatment design innovation, angled posterior implants help to eliminate the need for bone grafting by increasing bone-to-implant contact.

As Bo was fond of demonstrating on a chalkboard, napkin or a computer, from a biomechanical point of view, four implants provide an optimal solution for a full-arch and are eminently suitable for immediate loading strategies.

Our goal, of course, was to produce a 12-tooth bridge. Reviewing the literature, we found clinical cases (albeit not routine protocols) in which as many as three teeth were placed on cantilevers and were reported to work well.

All-on-4 concept in a nutshell

Consider the following: When the cantilevers of a complete prosthetic arch are loaded, only the supporting posterior implants are subjected to load. The remaining two implants, placed in the anterior, are subjected to no compression transferred over the fulcrum from the cantilever load and only negligible tension, which makes additional implants superfluous.

The use of ancillary implants actually makes the surgery more difficult, as each additional implant competes for precious space, which is usually in short supply, and sometimes completely unavailable. Also, for the sake of good, long-term prognoses, one simple fact must always be taken into consideration: The closer the implants are placed to each other, the greater the potential for marginal bone loss.

What about hygiene and fit? Basing each arch on only four implants facilitates oral hygiene, especially for older patients, the most common demographic among the edentulous.

The use of four implants also makes it easier to achieve passive fit, which is of critical importance whenever a cantilever is called for.

In short, the use of four implants reduces treatment complexity, which yields many benefits. Costs for both the doctor and the patient are reduced because less surgical time and product are used. The lab technician can profit from reduced intricacy in the fabrication of prostheses—leading directly to more predictable workflow patterns—and simplified hygiene bodes well for improved long-term oral health all around.

Having completed this preliminary analysis, I felt very secure about our proposed procedure and was eager to tackle our first case.

To minimize risk, I chose a healthy, highly motivated candidate with good bone density. As I proceeded with the surgery in April 1998, it became clear that inclining the posterior implants at approximately 45° was not going to be easy working freehand. As there were no teeth to provide points of reference, I ran the risk of missing the biomechanically correct position as I drilled.

To preclude this problem, I designed a universal guide that could be used for all mandibles. Made of metal, so it could be sterilized and reused, ours was a fixed guide, which was a remarkable innovation at the time.

The second and following surgeries went much more smoothly not only because of the guide but also because we were moving up the learning curve. After completing approximately ten cases, we decided to carry out twelve months of follow-up on those cases in order to evaluate results, before continuing. After one year, the results were extraordinary. We were looking at a success rate approaching 100%, no more marginal bone loss than normal, and a huge degree of acceptance by the patients.

These were heady days. From the moment we took those first tentative steps, we decided to continue along the same path, fastidiously documenting every step. Tremendous things transpired as a result.

All-on-4 treatment for the maxilla followed and thousands of patients have subsequently been treated in accordance with this concept. Equally important, dozens of clinical studies have uncontestedly documented the safety and efficacy—and remarkably high success rates—of the All-on- 4 treatment concept for the rehabilitation of the totally edentulous.

Anyone who does implant-based oral rehabilitation should consider learning All-on-4. With product support from Nobel Biocare, you too can place teeth on the same day as surgery, in a simple, safe and fast procedure. 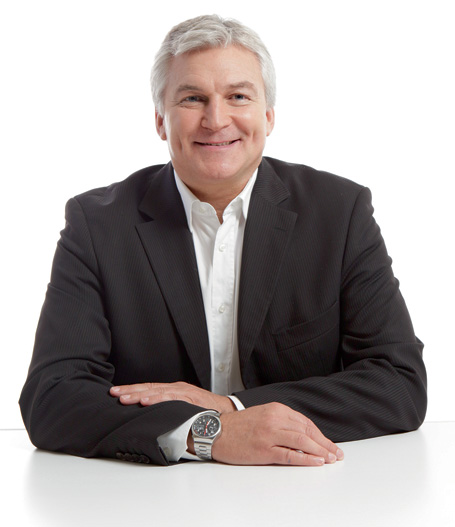 Dr. Paulo Maló of Lisbon, Portugal, has spent most of his professional life developing protocols devised to make oral rehabilitation possible—not to mention affordable—for patients who were previously not considered good candidates for implant-based rehabilitation.

This article is a reprint from Nobel Biocare News Vol. 14, No.2, 2012. © Nobel Biocare Services AG, 2012. All rights reserved. Nobel Biocare, the Nobel Biocare logotype and all other trademarks are, if nothing else is stated or is evident from the context in a certain case, trademarks of Nobel Biocare. Product images are not necessarily to scale. Disclaimer: Some products may not be regulatory cleared/released for sale in all markets. Please contact the local Nobel Biocare sales office for current product assortment and availability.

Russell Young is a prosthetist and master ceramist at Omega Ceramics Dental Lab- oratory in Melbourne and a key member of All-on-4 Lab Team Australia. He can be contacted on (03) 9826-6877.